The Home of the Brave

We’ve just arrived home from our long-awaited summer vacation to Washington D.C. and Baltimore, Maryland. This year’s 1p36 DSA Conference was held in Baltimore and it seemed only fitting to stop in our nation’s capital on the way.

We arrived in D.C. in the afternoon, and after checking into the hotel, made our way down to the Lincoln and war memorials. They were all absolutely breathtaking. As you climb the steps of the Lincoln memorial, a 99 ft. seated statue of Honest Abe stares back at you. On the walls on either side of the memorial, his Second Inaugural and Gettysburg addresses are engraved – a fitting reminder of the stoic decisions he made during his lifetime. When you turn to leave the memorial, you have one of the best views of the city as the entire mall stretches in front of you, first with the memorials, then the reflection pond, Washington Monument and in the distance the Capitol building.

Walking around the war memorials was a sobering reminder of those who have served and sacrificed before us. As it happens, our road trip book-on-tape was The Nightingale by Kristen Hannah, so war, love and sacrifice were themes already running through our minds at the time.

The next day, we had a U.S. Capitol tour booked, so we boarded the train and made our way back to the mall. The Capitol, like most other buildings in D.C. was stunning. I think gushing over the architecture (oi! with the rotundas!) was one of my favorite parts of this trip. After touring the Capitol we used one of the underground tunnels to the Library of Congress. Apparently D.C. Is riddled with underground tunnels. Pretty cool!

Afterwards, I made a quick trip into the Folger Shakespeare Library. Although, I’m not fancy enough to earn a card into the reading room, I’m still glad I went. It’s a beautiful building and such a testament to one family’s passion for literature. 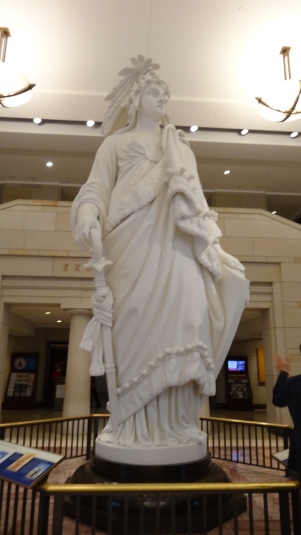 Next we made our way over to the U.S. Supreme Court building. This wasn’t actually one of our planned stops, and we didn’t get to go inside the chambers, but I still recommend it. So many important events have taken place here.

It also was here, I began to notice a trend with security at the locations. Almost every guard we encountered (and there is security EVERYWHERE) was kind of a grump. Was it the summer heat, dealing with hoards of tourists, or do they just hate their jobs? I dunno, maybe Mr. Trump can get them a pay raise (oh – and teachers too while you’re at it). 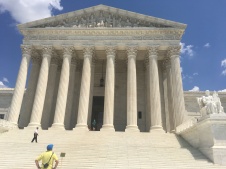 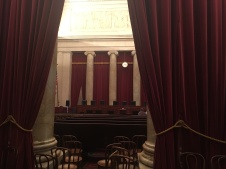 The third day, we walked by the White House – which was as close as we were going to get this trip. Even though I had requested a White House tour along with our Capitol tour, we were not approved. My suspicions lie with the fact that our Congressman is a democrat:)

Donald! You got some ‘splaning to do!!

We hit the Smithsonians next. We optimistically thought we’d be able to hit all the ones we wanted in one day, but DO NOT underestimate how exhausting walking around all day is – even though we took the bus and/or train when possible AND were in AC for the better part of the day. In fact, at the end of our trip, we tallied that we had walked nearly 25 miles in three days! This exhaustion was compounded by the fact that Ella stopped sleeping through the night during our trip and would really only sleep in our bed … or snuggling with daddy:) We are hoping against all hopes that this trend will reverse now that we’re back home (and I have to go back to work tomorrow). 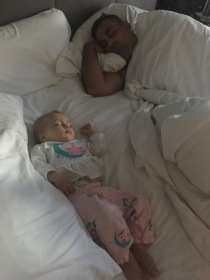 The Smithsonian Castle was pretty from the outside, but kind of limited as to what you can see on the inside. Next, was the Air and Space museum. This was one of my favorites and I highly recommend it if you have kids. We got Ella’s halloween costume here.  I’ll give you one hint as to what she’ll be … “that’s one small step for mankind.” 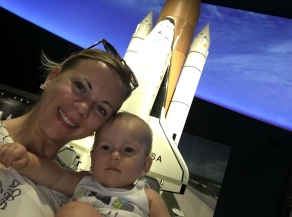 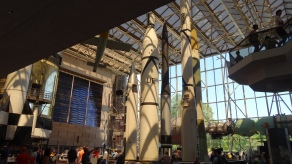 I took a picture of this poster from WWII as a reminder of what everyday citizens had to endure during the constant bombings in Europe.

After the Air and Space, we toured the Botanical Gardens and went to the National Archives to see the copies of the Declaration, Constitution and the Magna Carta, however, there is no photography allowed in that building. The following day we got to do the Natural History Museum and this is another spot I highly recommend for families. When you walk in you’re greeted by an African Elephant named Henry and then three floors of knowledge about human, animal and plant origins as well as rocks and minerals. During our trip, we got a peek at the Hope Diamond. I also got to take Ella through the butterfly exhibit. 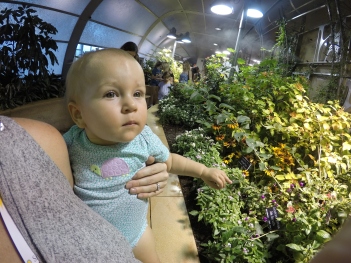 Our final stop in D.C. was the Arlington National Cemetery. I will admit, I was so hot and over tired by the time we got here. Compounded by the fact that Ella threw up all over the carseat in the parking lot, I wasn’t really that excited to get out of the car. Regardless, I sucked it up and climbed the hill all the way to the top, where the Tomb of the Forgotten Soldier lies. We were blessed to arrive just in time to witness the changing of the guard ceremony. Following that, we went by the Kennedy grave site. As we walked along, I noticed that among the thousands of headstones, many were for family members – even babies who were stillborn. You will notice that among the Kennedy grave site, there are two such headstones. This obviously brought up a lot of emotion, but also helped me feel a deeper connection to the past. 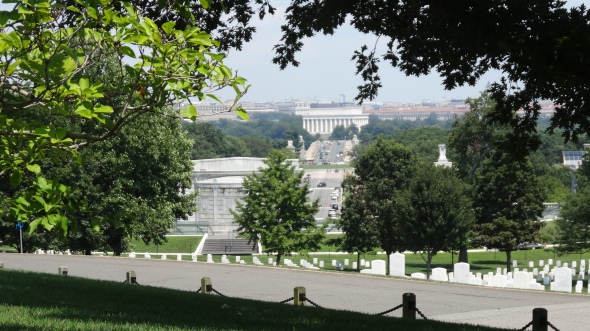 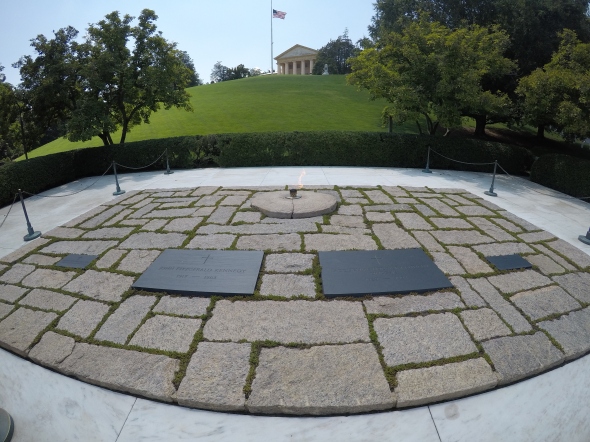 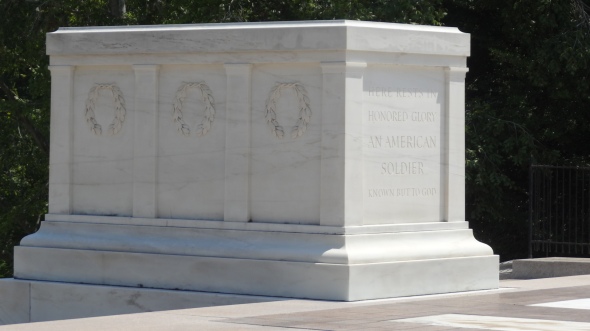 So, we left D.C. with somber hearts and made our way up to Baltimore, to reunite with our 1p family.  I knew this trip was going to be good and sad, but an important part of the healing process. Seeing all of Henry’s 1p36 brothers and sisters definitely hurt my heart, because it was another realization of the days he’ll never get to see and the things he’ll never be able to do. However, this pain was worth it because there is an unexplainable bond that unites us chromies. While 1p36 is a very child-specific condition and no two kids are exactly the same, these people know what it is to love through all the obstacles you have to face as a special needs parent. As I was telling people about our trip, I think some were surprised that we were still going even though Henry was gone. However, I was among several other angel families who came to see their 1p family and honor their beautiful children. Many angel families go back year after year because once you get a dose of these people, you just can’t stop!

Ella got to meet some of her 1p36 siblings (including one named Ella!) and the amazing Maisy, the Great Tobini’s little sister who is just two weeks younger.

The organizers of this year’s conference, Scott and Jennifer Winiecki, did a wonderful job introducing everyone to the Charm city. I can honestly say we had a wonderful time, both in and out of the hotel. They even started a new tradition for us angel families, of creating a scrapbook. Each family made a page for their baby and this book will travel around to the conferences each year. Those who couldn’t make it this year, will get to add a page for their angels at the next conference, and unfortunately – the reality that we all know too well – others will in the future.

Among all the activities for the conference, including an Oriole’s game, we got to see the National Aquarium, some old war boats, Edgar Allen Poe’s house and gravesite and Fort McHenry.  Each night, the parents would hang out in one of the smaller meeting rooms until the wee hours of the morning. This is another conference tradition – and an important part of the bonding experience that brings us all together. No matter how tired you are, you just cannot go to bed because you know the time you have with them is so precious. 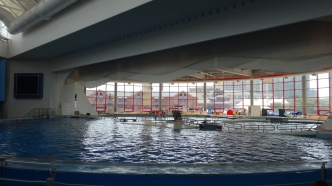 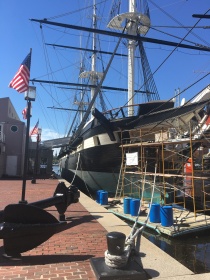 Random cool things from Baltimore including the Constellation, a piece of the World Trade Center and some yummy octopus.

Fort McHenry, with a view over the bay where Francis Scott Key saw the American banner  still waving after the British bombardment.

We said our teary goodbyes on Sunday and began the long drive back to Jacksonville (with a pit stop in North Carolina for some much-needed sleep and to catch our Game of Thrones). Teacher pre-planning starts tomorrow, so I won’t have much time, other than now, to reflect on all our experiences over the past week and a half. I’m so grateful for reuniting with old friends, the new people we got to meet and all the beautiful things we were able to see.

These memories, like all the memories we will continue to make as a family, will be shadowed by the fact that Henry wasn’t there to experience them with us. On one of our last nights at the conference, we got the news that another 1p angel had gained his wings. After the devestating news, we stood and prayed and cried together for our shared loss. And that’s one of the things I will always be most grateful for – the fact that these beautiful people share every triumph and tribulation right along with you. So, while the pain of losing my precious boy will never go away, one thing I will NEVER feel … is alone. 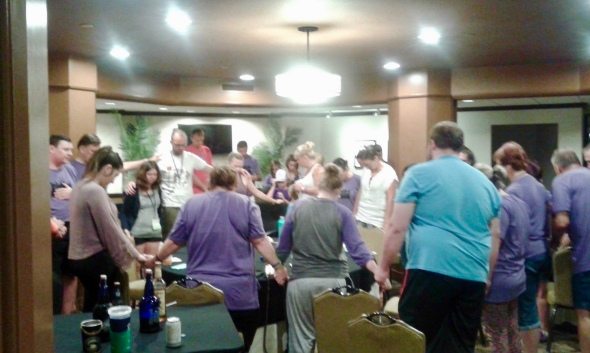