This is usually one of the most exciting doctor’s appointments in a pregnancy. During the check-up (Jan. 2, 2013), they complete the “anatomy ultrasound.” Of course the gender, was the main anatomy we were concerned with at the time:) However, along with finding out that “It’s a BOY!!!” – we also learned that our baby could have a cleft lip/palate. We were then referred to a specialist at the Regional Obstetrics Center (ROC) at Baptist downtown. 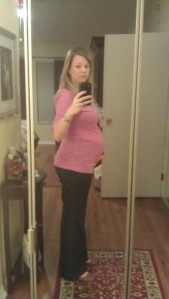 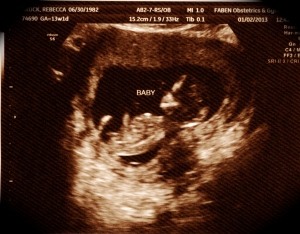 The next day (I believe) we were seen by the specialist which included an OBG and a genetic counselor. The cleft lip (palates cannot usually be confirmed in utero) was confirmed as well as a 2-vessel umbilical cord (3 is the norm) and a heart defect. These defects on their own were completely treatable and not life-threatening, however combined, they signaled the possibility of a chromosomal disorder. They then performed amniocentesis (drew amniotic fluid from the placenta for testing). Some of the possibilities we were introduced to, such as Trisomy 13 and 18 and DiGeorge, were pretty terrifying.

It definitely isn’t easy news hearing that your baby might not be healthy. In the days that followed there was a lot of crying … and praying. Sharing the news with our families made it that much harder, but I believe prayer works best en mass. And we were not let down:)

From there we were sent to the pediatric cardiologist at Wolfson’s Medical Center. Dr. Moon (the ped’s cardiologist) could be one of the nicest people I’ve ever met. He looked at the scans and drew us pictures to explain our baby’s heart defect. It is something called a ventricle septal defect (VSD), or basically a hole between his left and right ventricles. He said the hole was moderate, but didn’t appear to be life threatening or in immediate need of sugary. Yay for that!