First of all, can you tell that alliteration is my favorite literary device?:)

Henry had another neuro appointment on Oct. 24. It was a follow up after the surgery, but I also wanted to talk to them about scaling back the anti-seizure meds. After the apneic spells in the hospital he went home on both Keppra and Phenolbarbital. I was hoping he would scale back the Phenolbarb because it has the worse side-effects (and based on Henry’s reaction every time I have to give it to him, tastes terrible). He ended up pulling him off the Keppra first, because, he said, Phenolbarb is more dangerous to wean. About a week or so later, we had weaned him off the Keppra and within 48 hours he started to have short apneic seizures again. Most lasted less than 10 seconds, but he had a longer, nastier one so after talking with the docs, we put him back on a low-dose of Keppra. We’ve tried different flavors with the Phenolbarb to try and help. We currently have grape, which he seems to hate the least so far. We will begin discussing weaning him off the Phenolbarb once we know a surgery date (for the lip repair), but he wants him to stay on some dose as he goes in for surgery since it’s a stressful time. “He” by the way is Dr. Raj Sheth, Henry’s neurologist and one of the best seizure experts in the area. Since his seizures tend to come back after coming off meds, I’m hoping they can find a moderate dose of Keppra that will do the job, so we won’t need Phenolbarb at all.

Halloween week was pretty eventful for Henry as we played dress up the whole week. I didn’t do the whole trick or treating thing because, let’s face it, I did’t need the extra candy. However, we did celebrate Veteran’s day weekend by visiting Lake Wales, Fla., where we were able to meet up with some other families with children diagnosed with 1p36. It was both interesting and confirming that no two 1p36 kids are created equal. Although, this particular group did share one commonality … little to no talking. When Dan and I first began to educate ourselves about Henry’s condition, this was a possibility we read about. We purchased Baby’s First Signs and also downloaded some ASL videos. I suppose we should start teaching ourselves sooner than later. Regardless of Henry’s verbal ability when he gets older, I think it’ll help him when he learns to start communicating.

After the 1p36 picnic, we continued onto Tampa to visit some friends. Henry tolerated his first road trip very well. We spent Veteran’s Day on the road home, then got to take Henry to get his very first picture with Santa! Community Peds Care paid for all their members to have their pictures taken. We’re hoping to get the prints back relatively soon, so we can use one on this year’s Christmas card. I guess you’ll all have to wait to find out!

Henry’s plastic surgery consultation was Wednesday (11/13) and pending an official clearance from cardiology, we should know the date of his lip repair fairly soon. I am hoping for mid-December, so I can ride into Winter Break and won’t have to worry about sending him back to daycare afterwards. I’m less worried about the actual surgery, but I hope the ordeal isn’t too painful for him. It is also going to mean that I won’t be able to breast feed for a few weeks (we’ll have to feed by syringe post-op), so that should be fun [insert sarcasm here]. I am also a little anxious to see what he’s going to look like after he heals. I know the doctor will do a good job, but I have fallen in love with him just as he is now. It’s hard to imagine staring at any other face. Speaking of … 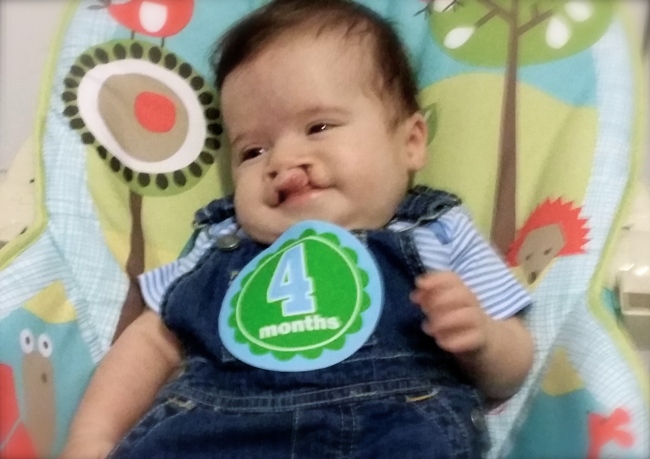 One thought on “Seizures, Signs, Santa and Surgery”