The story of Henry’s awesome Godmother

This is a post I’ve been meaning to write, however this is the first time my thoughts and a moment to spare have come together. So now, whilst being serenaded by Stevie Wonder, let me explain to you how Henry came to have the best Godmother around.

By now you all know Henry’s story – from the beginning to present. However, I have inexcusably left out a rather important detail. A little over half-way through my pregnancy, I knew that Henry would need a very special Godmother. One who would hold the title true and spiritually lead him though a path of love, faith and hope.  With everything we had going on, I knew Henry would need someone who was close by and had an enduring Faith in Christ. It was a pretty easy decision because only one name came to mind … Charlotte Rebekah Grubbs.

Over pot roast and through teary eyes, Charlotte graciously accepted our request and has gracefully lived up to her role since then.  From the time I was still pregnant, she sat with me while pouring over our diagnoses and other new mommy stuff. She visited the NICU, where her love for our little boy became apparent instantly. Through the heart surgery, she not only visited on an almost daily basis, she brought cards and posters her coworkers made … Oh, and let’s not forget the hamster cat. 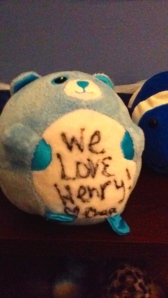 She did a beautiful job during the actual baptism. During the service, a candle is lit and given to the sponsor (aka: Charlotte) and the pastor says “Let your light so shine before others that they may see your good works and glorify your Father in heaven.” I hope that Charlotte knows that her light shines wherever she goes!

During every major illness and hospitalization she’s been there, both physically and in prayer.  And, I would be remised if I didn’t mention one very unexpected benefit of having Charlotte as a Godmother … having her mom Cindy as Henry’s Great Godmother. I don’t know if that’s an actual title or not, but it is actually hers. This crazy, hilarious, God-loving woman came into our lives by proxy of her amazing daughter. Aside from her roles as a daughter of Christ and Charlotte’s mother … she plays two other important roles; a thirty-one consultant and a world-traveler. These are important because Cindy has graced the Kruck household with a significant portion of her 31 stock. Additionally, she donated a portion of her commission to Henry’s daycare to purchase some new seating. And lastly, I think she’s bought Henry a souvenir from almost every destination she’s traveled to in the last year. This is significant not just because Henry has gotten some pretty cool schwag out if:), but because when she’s in all these incredible places with so many other things to think about … she’s thinking of Henry.

If these two ladies didn’t already know how important they are … I think these verses sum it up. They’re doubly appropriate since they come from the book of Timothy … the name of Charlotte’s favorite brother and Cindy’s favorite son:)

“12 Fight the good fight of the faith. Take hold of the eternal life to which you were called when you made your good confession in the presence of many witnesses. 13 In the sight of God, who gives life to everything, and of Christ Jesus, who while testifying before Pontius Pilate made the good confession, I charge you 14 to keep this command without spot or blame until the appearing of our Lord Jesus Christ”