Yesterday, the guys (and gal) at Dan’s work set up an awesome gift for us including a bunch of diapers, wipes, toys and a Visa gift card. Dan’s worked for JEA (our local utility company) for more than a year and half now and I finally got to go and get the tour and put some faces with names. It was pretty obvious that it wasn’t intended to be a “shower” nor would I expect a bunch of sweaty warehouse workers to play the “baby” game and sit around and chat over cake and punch. It was all very much appreciated anyway. 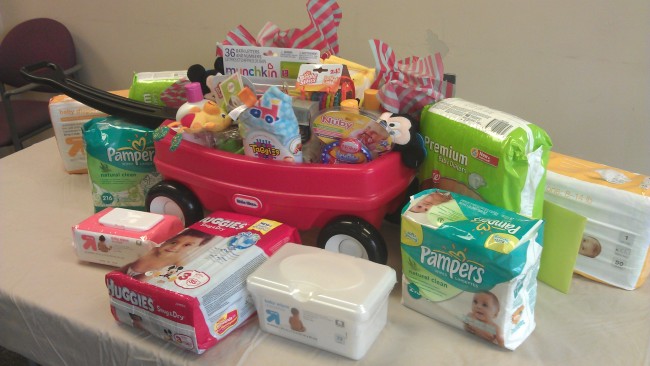 We are narrowing down the checklists (yes lists) of things to do before Henry arrives. Being off work has been a huge help in getting everything ready, although I’m now finding myself with too much time on my hands. There is an internal battle going on right now. One half is telling me to get everything done NOW! before the baby arrives, while the other half (I assume my logical left brain) is reminding me that I still have 3 weeks left and that I should really pace myself.

Those who know me know that I have a very hard time sitting still for prolonged periods. Luckily, I feel like I’ve had more energy these last few weeks than throughout my whole pregnancy. I don’t know if it can be attributed to being off work or the hormones that help you nest the last few weeks of pregnancy. Either way, my house will probably be cleaner and more organized in the next few weeks than it will ever be again.

I think I’ve researched every recommended pre-delivery checklist known to man in an attempt to make life as easy as possible during and post-delivery. Some of my “to-do” items in the next few weeks include:

– Organizing his dresser and changing area

– Installing the car seat bases in both cars

– Setting up his swing and bassinet

– Making room in the kitchen for “his stuff”

– Sanitizing bottles and the breast pump

– Preparing a week’s worth of “make/freeze ahead meals”

It sounds like a lot, but I will probably be done by the end of next week.

Next weekend, my friend Christina (a budding photographer) is coming to do some maternity photos. I can’t say I’m ever super excited to get my picture taken, but I will be thankful to have these moments recorded in the future. And I’m always happy to support any form of art.

Henry is doing well and hasn’t given me any signs that he’ll be making an early arrival, but he does appear to be running out of room (as the not-so-gentle kicks in my ribs tell me). His last measurement appointment (at 34 weeks) had him weighing right at 5 lbs. and roughly 18 in. long. This last appointment only measured his biophysical profile (BPP). It included a non stress test, where they hooked me up to monitors to measure his heartbeat and movements. It also included a scan to see how he’s doing on the inside (use of amniotic fluid, etc). I’m happy to say he scored a 10 out of 10! The scan tech also said she noticed the cleft palate seems to be more heavily pronounced on his left side than on the right. So, there is a possibility that it is only a unilateral, and not a bilateral cleft. However, only time and the Lord above will tell.

I believe that’s it for now. I will try to use some of my free time to post at least one more time in the coming weeks. I can’t say how productive I’ll be post-delivery. As always, I appreciate everyone who has supported us during this pregnancy. Regardless of what else is going on in the world right now, I’m glad to know that our little world is made of love!