Our day began today at midnight, the official beginning of Sept. 24, 2013. Henry and I woke up for his last breast feed before surgery. He had a nice meal, a change, and then back down to sleep. We woke again at 4 am to change him, give him his meds and try to get him to take a little Pedialyte before heading off to the hospital. He wasn’t too interested in that stuff. The Pre-op nurse described it as going from sweet tea to unsweetened tea:)

We arrived at Wolfson’s around 5:30 am and went back for pre-op at 6 am. After height, weight and changing him into his gown,  we were taken to his pre-op room until time for surgery. I thought Henry would be so much more cranky than he was, after not having eaten for so long. However, as always, he got through it all like a champ. He was wide awake, vocal and wiggly and didn’t really start to protest until about 10 minutes before the OR nurse came to get him. She is a very grandmotherly nurse and had him calmed down in just a few seconds. 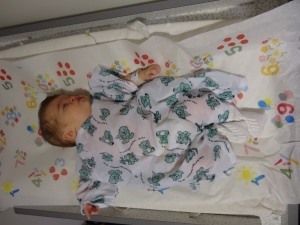 Just after taking him back, they gave him gas to put him to sleep before inserting the lines for general anesthesia and the intubation.  The nurse should be down any moment to update us before they perform the first cut.

Letting him go was one of the hardest things I’ve had to do in a long time. Oddly enough, it doesn’t feel as bad as having to leave him in the hospital for the first time in the NICU, but I can probably blame that on all the surging post-delivery hormones. I don’t want to think about having to leave him here tonight yet. We’ve got a long day to get through before then.

Right now it feels like my heart is on the OR table right next to Henry. I am going to try to catch up on some papers to grade and distract myself as much as possible to pass the time in between updates from the OR. I will do my best to update here as often as I can. I am drawing strength from mothers who have gone through situations like this before me (like you Annie Stein) and from the hundreds of people praying for Henry all across the country. For now we wait … and pray.

One thought on “Heart Surgery, Part I”